I zip up my OzHarvest jacket on this cold Friday afternoon and wait with anticipation until it’s time to jump in the truck. Today, I am joining Tim as he drives around the city picking up and ‘delivering goodness’, experiencing first-hand how this wonderful charity works. OzHarvest touches the lives of thousands of Australians by rescuing excess food that would otherwise be thrown out, and redistributes it to local agencies that support the vulnerable. The national statistics are astounding with 35 tonnes of excess food collected each week and delivered to over 500 charities. OzHarvest operates across Sydney, Newcastle, Brisbane, Melbourne, and Adelaide – where it began operation two and a half years ago. In June, OzHarvest Adelaide rescued their 1 millionth meal, and more than 100,000 meals have been rescued from the Adelaide Showgrounds Farmers’ Market and the Adelaide Central Market combined. 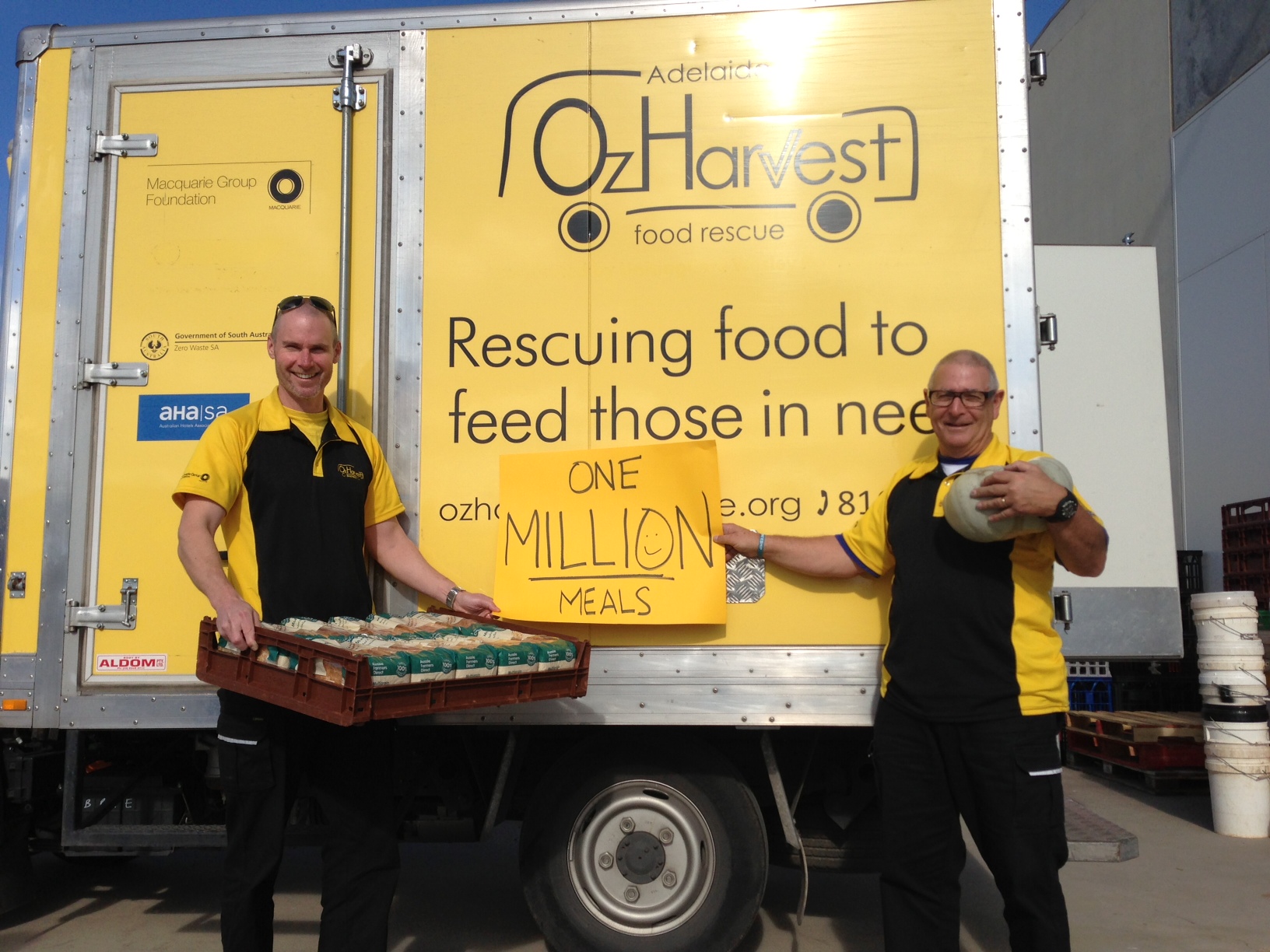 Before we leave on the run I sit and chat with Hayley Everuss, State Manager of OzHarvest Adelaide and Emily Bryson, Operations Administrator, who are both very passionate about what they do. I discover there are all sorts of reasons why donors call. Often, they initially contact OzHarvest in a bit of a pickle with excess food they don’t know what to do with. For example, one company had two palettes of jam that had been cooked a little too long. It was not fit to be sold but was still perfectly good to eat. ‘Last year,’ continues Emily, ‘the local cherry crop was a bumper one…the fruit was extra fat and juicy. OzHarvest got a call from a grower who couldn’t sell some of his cherries as they they just weren’t good enough for the extraordinary market conditions; they were small for the season, and couldn’t compete.’ OzHarvest arrived to find boxes and boxes of perfect, gorgeous cherries, 250 kg! Right at Christmastime, the agencies just loved them. ‘Especially for the drivers who get to deliver the much appreciated food, it’s a bit like being Santa Claus,’ says Emily. 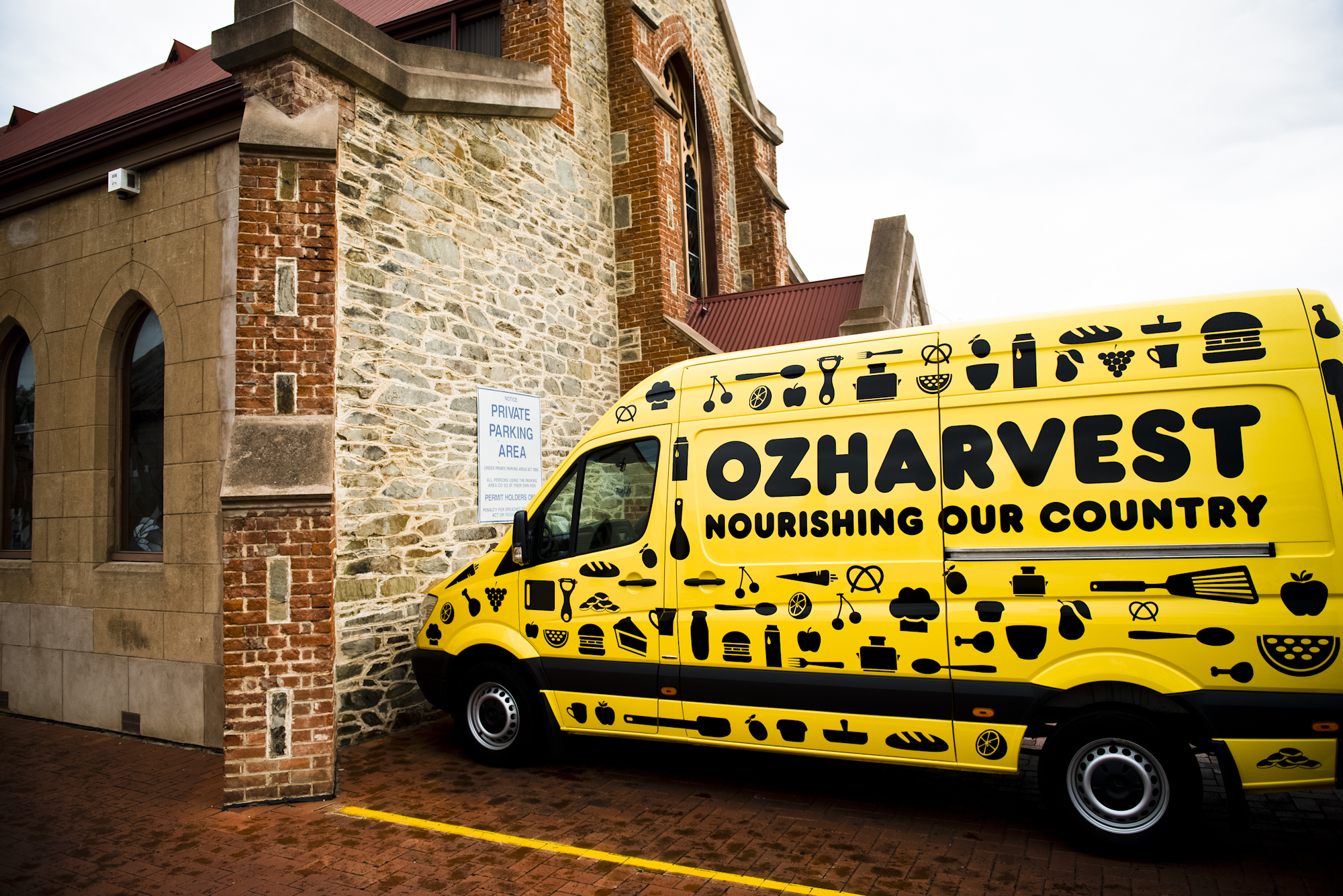 On another occasion, a local organic milk company made a production error, bottling 4-5 palettes worth of full-cream milk in skim bottles. With the cost of rebottling too great, they rang OzHarvest…And then there were the eight palettes of beautiful truss tomatoes that arrived in South Australia en route to Perth. ‘Although destined for Western Australia, they did not comply with the state’s quarantine regulations and were going to rot in the warehouse,’ says Emily. OzHarvest came to the rescue.

We jump in the truck. Tim rattles through the city and heads down Port Road to Welland. Our first stop is a business that distributes to health food shops. The new donor explains that he was driving behind the big yellow truck in traffic, and when he thought about how much food he had wasted in the past, he decided to give the charity a call. ‘There is only so much yogurt and tofu you can take home and eat,’ he says. We collect a few litres of organic milk and weigh it in the back of the truck.

As we drive to our next stop, the Lirra Lirra Cafe at Urrbrae Agricultural High School, Tim tells me that the runs can vary greatly. ‘Every day is different, you never quite know what you will find. Once we picked up 100 kg of flavoured frozen yogurts in stainless steel cups due to an oversupply. Everyone loved them!’ Donors range from hotels, cafes, bakeries and supermarkets to catering companies and produce markets. ‘We pick up from a cooking school every Friday and it can be anything up to 500 kg of food. The average pick-up there is 200 kg, and it’s all excellent quality.’

As we bounce on the seats, high above the traffic, Tim tells me that he started as a volunteer with OzHarvest and became a part-time driver because he wanted to immerse himself more in a charity. ‘My role is not just about delivery, it’s about relationships, raising awareness and providing a service to those in need,’ he says. As far as I can see, everyone wins and OzHarvest has filled a massive gap that existed in food waste. ‘Donors are happy to have their excess produce used, and charities are even happier to receive,’ says Tim. There are lots of opportunities to volunteer and for those who would like to find out more, a Volunteer Information Session will be held on 8 August at 6 pm in the Central Market Kitchen.

Tim with the food collected from Lirra Lirra Cafe

We pick up a variety of goods at Lirra Lirra cafe including salads, cooked meals, drinks and sandwiches. There’s 24 kilos all up, around 70 meals. Our next stop is a backyard garage in suburban Malvern, where Keane’s Organic Food run their business. Here, we load up a whopping 47 kg of beautiful fruit and vegetables. Today’s run is to be delivered to a mobile food service program operated by St Vincent de Paul Society that feeds the homeless and hungry of Adelaide from a van. 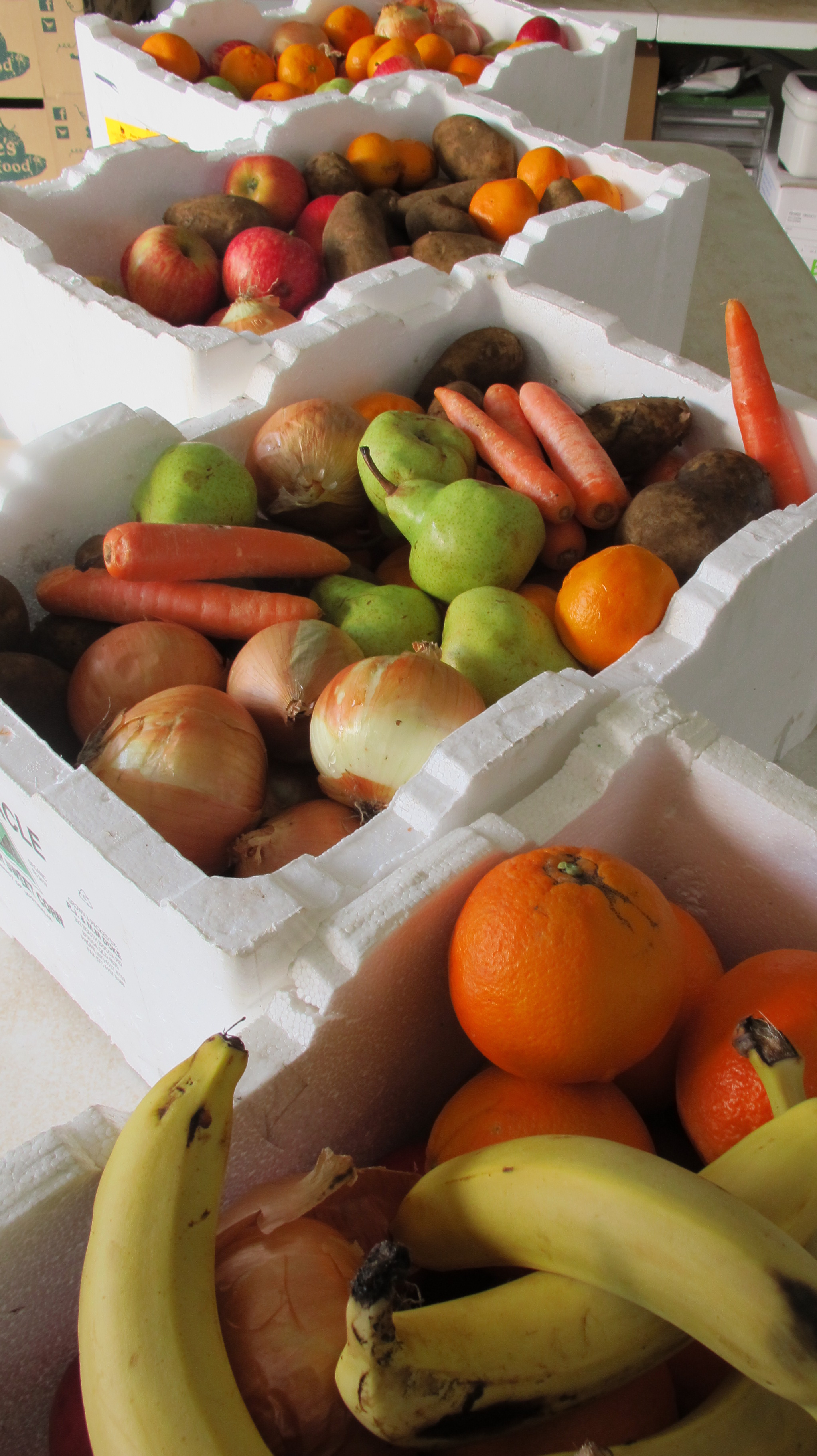 Enlightened, it’s time for me to jump off the truck but Tim still has a couple of stops. Next is a bakehouse in Goodwood that OzHarvest picks up from five days a week. ‘There’s always some surplus, in case they have a big day. Typically, there will be two trays of pastries and around 16 kg of freshly-baked bread rolls. There’s often hot cross buns around Easter time.’

If you would like to support OzHarvest in raising awareness to help fight food waste, you might like to attend ‘Be a Souper Hero’, a free Lunch for 500 on Monday 29 July from 12 noon to 2 pm on the Goodman Lawns of the Adelaide University, North Terrace. Lunches will be held simultaneously in Sydney, Adelaide and Brisbane and the delicious food will be made from rescued ingredients that would otherwise end up in landfill.