Like most kids growing up in rural South Australia in the ’70s, exotic holidays were not part of our lives. Summer school holidays mostly meant carefree, barefoot days at home, the risk of fire too great to leave the farm unattended. Shearing time often fell during the May and September breaks, when the whole family rolled up their sleeves and got to work.

Goodness knows how many cakes I cooked during those times! As well as a necessity on the farm, baking was my creative outlet and I spent hours in the kitchen at my mother’s side. Just as one cake was placed in the oven I would slide open the large drawer stuffed full of recipe books, flick through the pages and decide on what to cook next. Thankfully, large bins of flour and sugar were always on hand, and fresh eggs and milk in plentiful supply. One day during shearing time I recall trying to beat my ‘personal best’, baking 22 log cakes for the shearer’s smoko and lining them all up on the bench, proud as punch. Shame we didn’t have instagram back then!

These cookbooks were not glossy affairs with mouthwatering photos but sensible paperbacks with time-honoured recipes by good country cooks. Put together by the Country Women’s Association (CWA), school and church groups or the Red Cross, they were designed to be helpful, not delightful, and were about relaying information, not inspiration. You had to use your own imagination. I recall in my mid-teens receiving my first hardcover recipe book with pictures: the Australian Women’s Weekly Cookbook, and I thought it ever so sophisticated. I still use it occasionally but it now looks far from what we would consider glam! 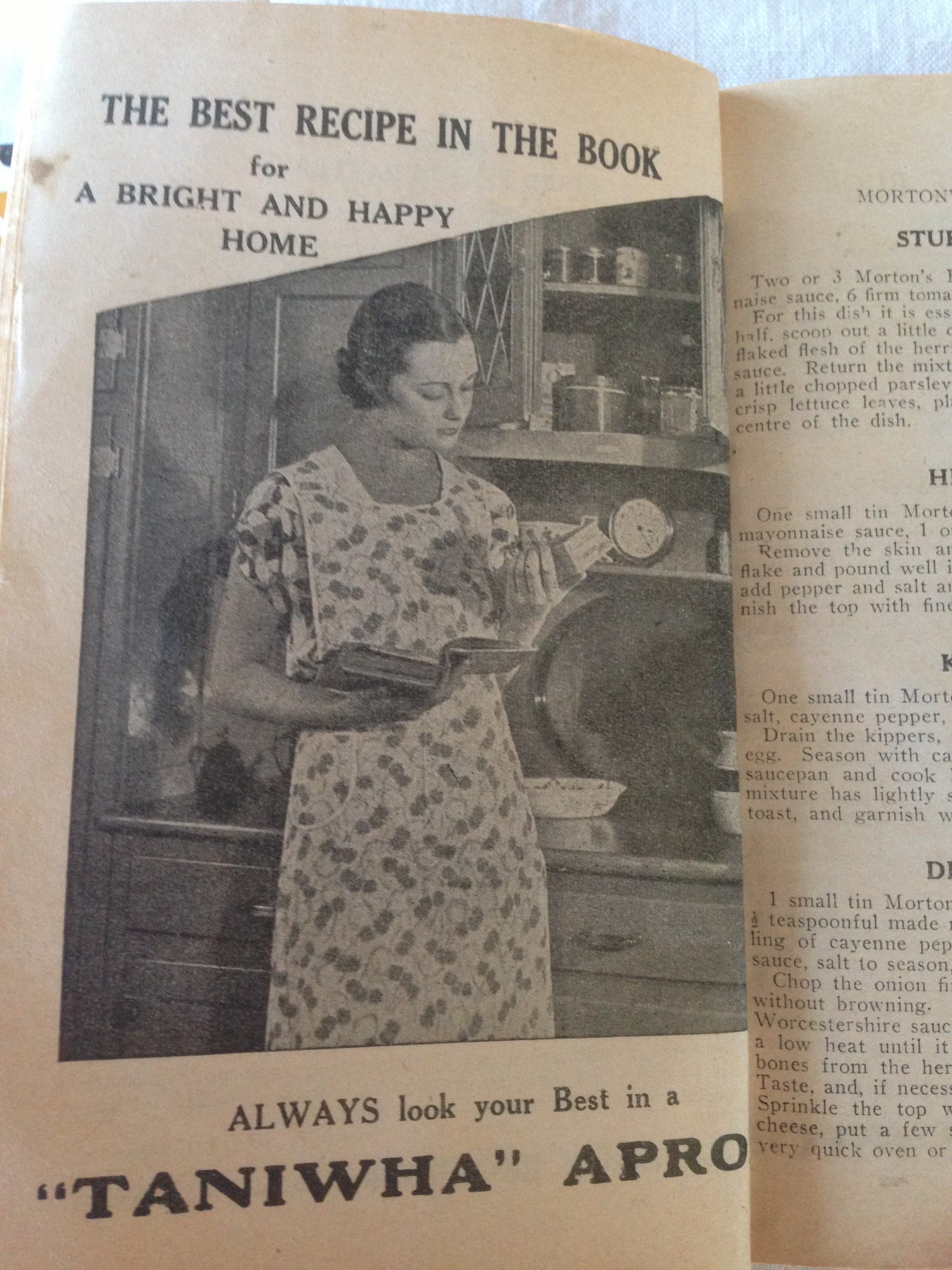 Pulling out these old books today, one thing that strikes me is the level of assumed knowledge in the recipes. Any home cook worth their salt didn’t need the method spelled out in detail! Their pages not only provide a peek into the dishes that graced the tables of the era they were published in, but into the life and times, giving a glimpse of what was expected of women and the patterns and rhythms of everyday life. 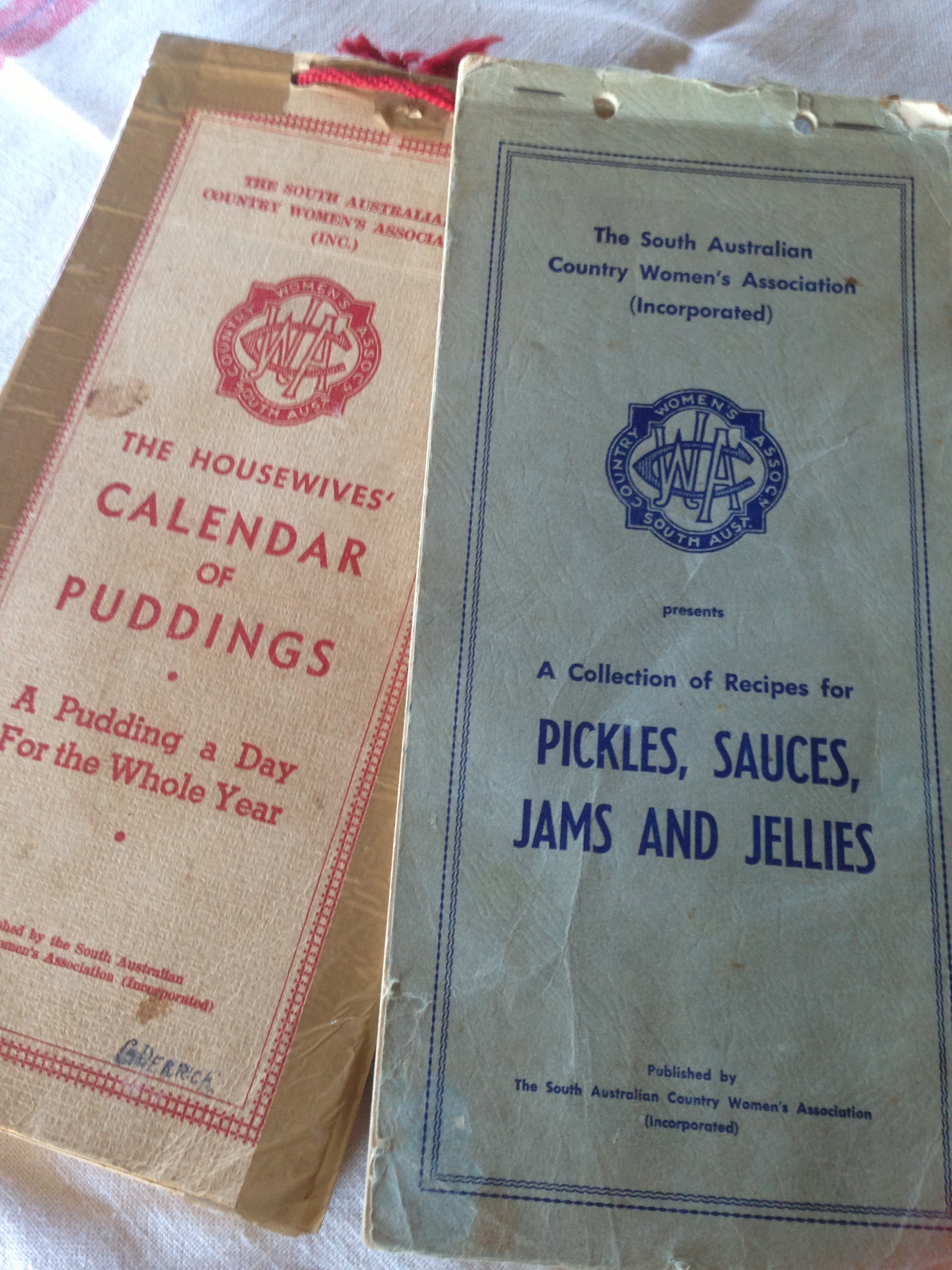 I love The Housewives’ Calendar of Puddings published by the South Australian branch of the CWA, complete with an inscription from my grandmother to my mother, dated 1949. In the foreword is written ‘How often do hundreds of housewives say, “Whatever shall we have for a pudding today?” – and wish they could think of something different. The South Australian CWA has endeavoured to help with a solution to this problem by preparing a calendar with a recipe for a sweet every day in the year.’

No pressure! All domestic goddesses should be able to whip up a pud every evening, right, 365 days of the year? It reminds me of a kind of Julie & Julia scenario, where young New Yorker Julie Powell aspires to cook all 524 recipes in Julie Child’s cookbook in the space of a year. Perhaps down the track, if I have the stamina, I will attempt to cook and blog through the Calendar of Puddings! There is also a CWA Calendar of Cakes, Meat and Fish, and a collection of recipes for pickles, sauces, jams and jellies.

I adore the perfect, handwritten cursive in some of the books along with some of the recipe titles, from Feather Tea Cake and Blowaway Sponge to Cream Lillies and Lover’s Knots. Published in times when nothing was wasted – even the dying heat of a wood oven – many recipes have more down-to-earth names. Odds-and-Ends Pudding, for example, made when ingredients were scarce and times were tough, or Drought Plum Pudding and Thrifty Cinnamon Cake. Scrambled Brains, calling for two sets of sheep’s brains, doesn’t exactly evoke delicious thoughts, and when time was limited due to other chores, you could always pop a Washing Day Pudding in the oven.

From the age of seven I baked Simplicity Chocolate Cake from Cooking Country Style, a book of recipes collected by members of the Kybybolite Red Cross Branch, a tiny town near the South Australian-Victorian border that was at the time a prosperous wool growing district. 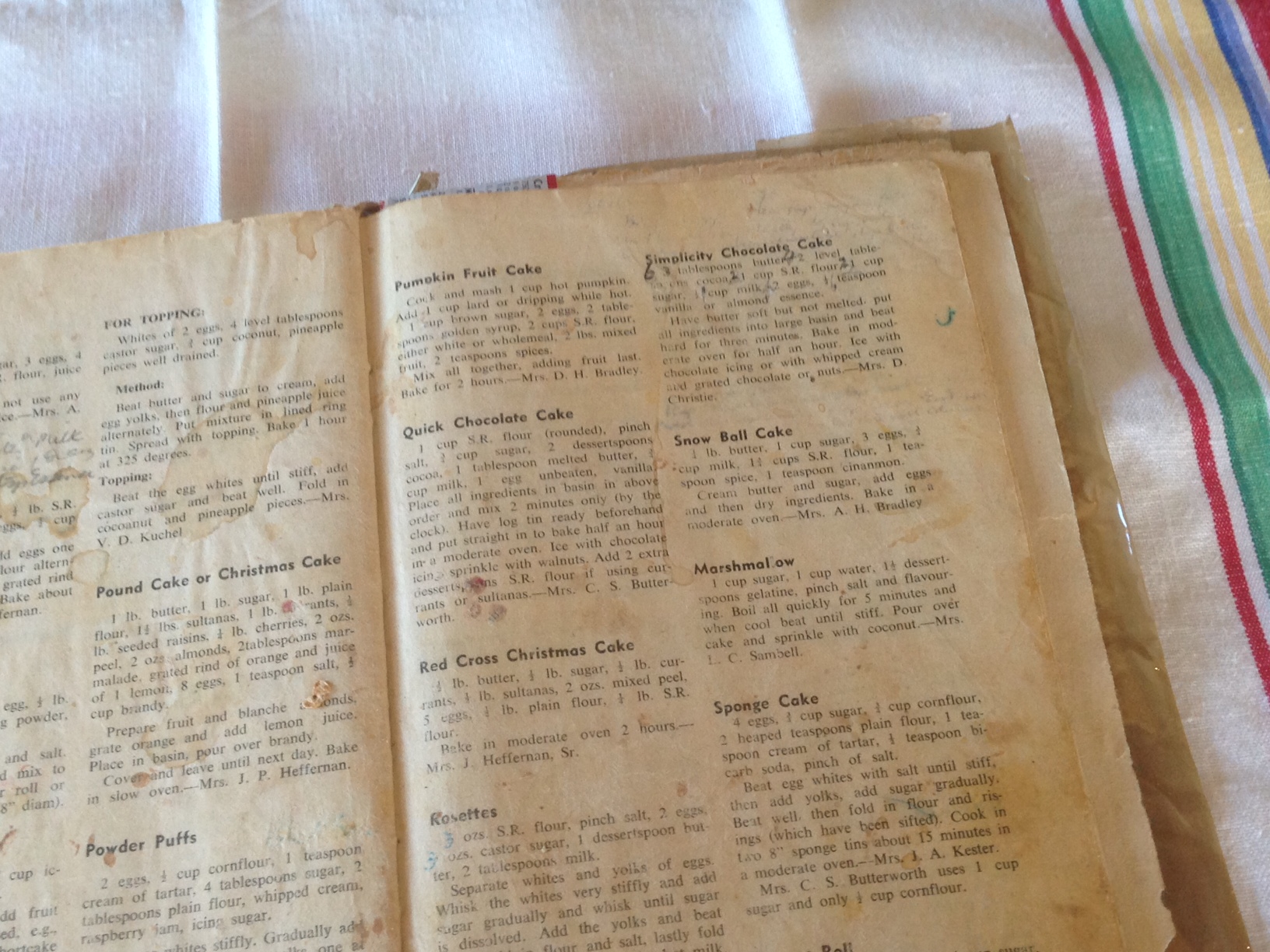 With seven ingredients and everything lumped in together, it was an easy cake for beginners. Rarely were the cake tins empty and there always seemed to be at least one log of this very basic chocolate cake in the house, topped with chocolate icing and sprinkled with hundred & thousands or coconut. At shearing time it was made en masse. The recipe was passed down to my daughters who changed the title to the much more enticing Secret Seven Chocolate Cake. Nowadays, it’s not just about practicality; we like everything to sound more appealing. 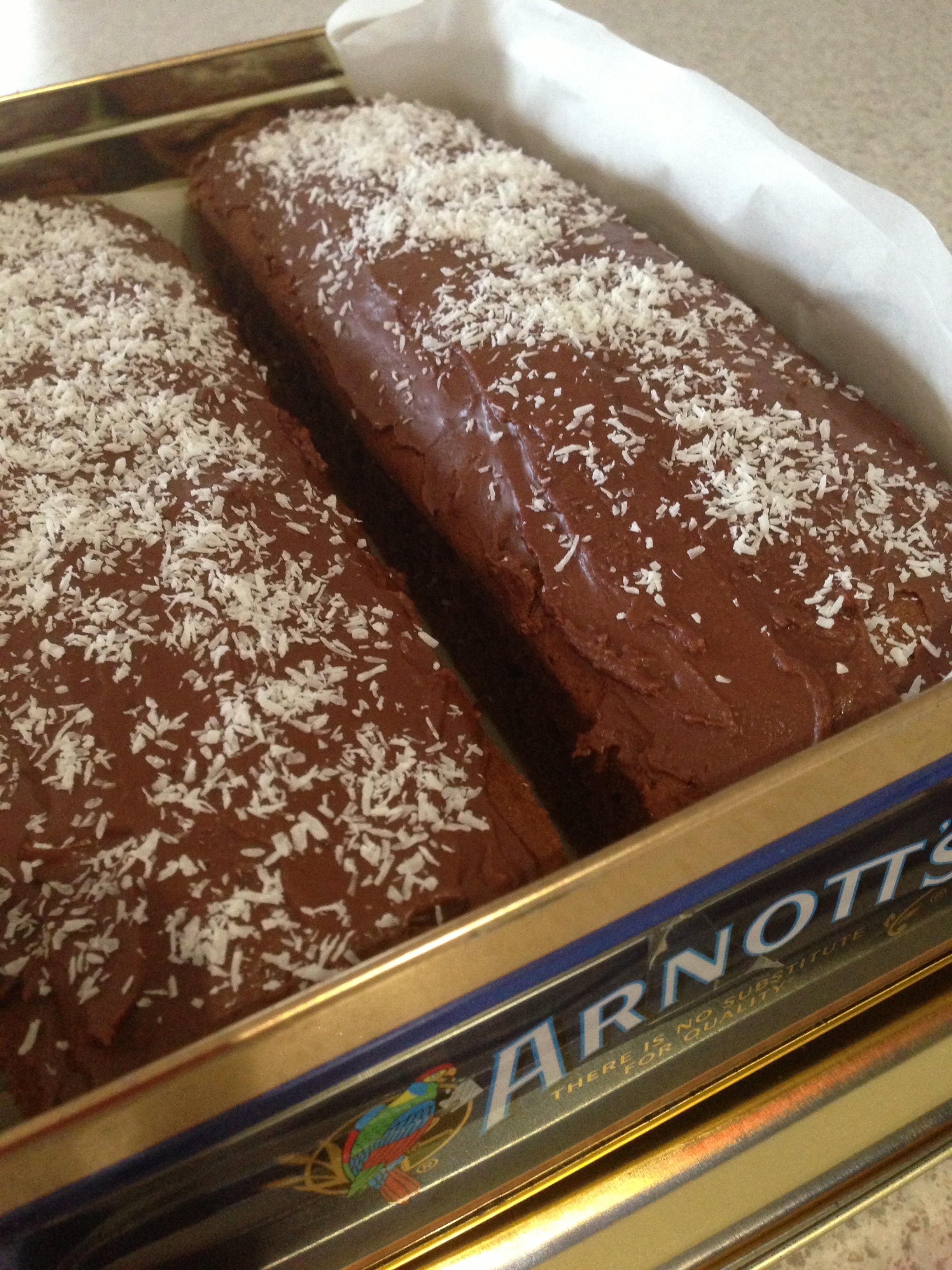 Some things you never forget and I can still recall the seven ingredients by heart in a flash. It may be a simple recipe – quite unlike the dense chocolate mud cakes of today, but it is also a powerful legacy that connects our family though the generations. After a long hiatus, I couldn’t help but make it – and with that first soft bite, memories come flooding back.