As a child, I found such unexpected pleasure in the rambling vegetable patch that burgeoned just outside the kitchen door, pulling carrots for dinner and watching the Queensland Blue pumpkins swell. The veggie patch, however, was often the bane of my mother’s life, and I can still see her flying through the kitchen door violently flapping her tea-towel and calling out ‘you brute’.

George was the culprit, our pet sheep.

An animal of formidable character and cunning, George was no ordinary sheep. One day, the rams followed him into the garden and started to chase him. He quickly led them towards the swimming pool, skirting around the edge at the last second while they continued straight onto the wobbly pool cover, piercing it with their feet. Do you know how difficult it is to drag three waterlogged rams from a sinking ship?

Orphaned at birth in 1972 at our property Langkyne, George stood out from the mob from the beginning and unwittingly became a treasured family pet. He refused to associate with other sheep and each time he was introduced back to the paddock he found a way home. An eccentric, he took an instant dislike to little boys who came to visit, taking a big run up and bunting them hard from out of the blue but loved little girls, and walked alongside them chewing their locks.

A gourmand and bon vivant with a sophisticated palate, he spent most of his day in the house paddock where he would nap next to the petrol bowsers, one eye open, waiting for any opportunity to bolt through a gate left open to the garden or the orchard. Along with bites from the veggie patch he had a particular fondness for my mother’s roses and a weakness for juicy plums straight from the tree, spitting out the stones that he sucked bare.

Enhancing his diet with Froot Loops, dog nuts and chook pellets, George took out first prize for his fleece at the local agricultural show at 12 months of age. Despite various attempts by other competitors to weasel out of my father what this champion was bred on, he never did disclose the top-secret information. George went on to win numerous ribbons for his strong merino wool, and his prize-winning fleeces toured Australia and Japan.

With a taste for the limelight, in 1986 at nearly 15 years of age, George became part of the South Australian Jubilee 150 On the Sheep’s Back celebrations. As one sheep year is equivalent to 10 human years, George represented the whole of the state’s 150 years. Rising to his title of Jubilee George, he was chauffeured (on the trailer) from the farm up to Adelaide and went on tour, parading around shopping centres with his head held high, wallowing in his fame. Occasionally the gourmand would sneak a lick of a kid’s ice cream. 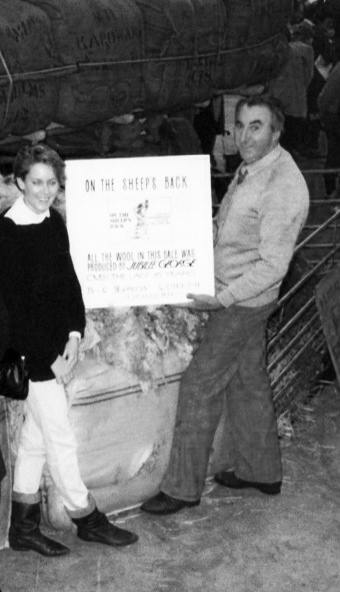 At night during the tour, he retired to my suburban backyard in upmarket Hyde Park, the same yard that my farmer brother had ceremoniously ‘burnt off’ a couple of years earlier when we first moved in. That’s what you do, don’t you, with long, dry grass? He made a fire break, checked the wind, lit a match and we watched the flames leap and crackle across the yard in a flash, fizzling out at the fence.

My father kept George’s fleeces together to see how much wool he would cut in his lifetime, not realising the interest it would create. By his death in 1988 at age 16 (the average lifespan for a sheep is 5 years), George had amassed enough fleeces to fill a single bale, a unique feat, especially considering he had to be dragged, kicking, to the shearing shed to be shorn.

I was hosting a dinner party at home in Melbourne when the call came. ‘We’ve had a death in the family,’ said Mum. ‘George has passed away’. Dramatically of course, by the bowsers amid a thunderstorm. Devastated, I kept the news to myself, figuring my city guests could not possibly understand.

George is proof to us all that it pays not to follow the mob, but his story doesn’t end there.

George had one final glory. After his death, the tale of his life was displayed at the National Wool Museum along with a perspex bale of wool demonstrating the quality and quantity of each year’s fleece. Unfortunately my brother recently received a phone call to break the news that the bale had become infested with wool beetle and had to be removed, but you can still read his story and raise a glass to dear old George in the Black Sheep Cafe & Restaurant.

About the National Wool Museum

Situated in Victoria’s largest regional city, Geelong, the museum  is a one-hour drive from Melbourne and near the start of the Great Ocean Road. Visitors are taken back to a time when Australia rode on the sheep’s back, to legendary figures in history and to the romance of the industry, when drovers, shearers and bullocky teams created our national mystique.

Set in a restored 1872 bluestone wool store, the museum is entertaining, educational and child-friendly with interactive and working displays. The Wool Harvest looks at wool production and sheep farming in Australia from the 1840s to present day, and offers an insight into life on the land. I particularly like the recreated shearer’s quarters and shearing shed that are brought to life by film and song with soundscapes of whirring handpieces, barking kelpies and warbling magpies. From Fleece to Fabric is the Geelong story and centres on manufacture and the textile industry. Various processes involved in transforming fleece to fabric are shown through a display of machinery.

As well as running tours, educational programs and holiday activities, often with shearing demos, the museum hosts a variety of temporary exhibitions, ranging from photographic to textile art. Also on site is a shop, stocking a wide selection of quality Australian wool products.