Just an hour’s drive from Adelaide and a short pedal from the cellar doors of the McLaren Vale wine growing region, Willunga is one of those country towns that inspires a ‘tree change’. Steep green hillsides frame the town, with views through to the sea past orchards and olive groves. Corduroy-ribbed vineyards snake up hills and wood-smoke curls in the air. The vibrant centre itself has a thriving arts community and a jumble of historic stone buildings that house quirky galleries and an array of good eateries.

What I find most intriguing is a European provincial feel about the town and surrounds that can’t be ignored, along with a strong culture of good food and wine. You could almost be in Provence.

Driving towards the town last week to meet friends for lunch, I pass a riot of almond trees dressed in pink and white blossoms, a brief, spectacular show that will soon be blown away on the wind. The town is home to an Almond Blossom Festival and is the start and finish of a leg of the Tour Down Under bike race each summer. On weekends, cyclists in lycra hang out on café terraces sipping lattes, and a cycle path connects Willunga to McLaren Vale. The friendly Willunga Farmers’ Market sets the scene in the heart of town on Saturday mornings, an enticing introduction to the array of local produce grown and prepared by small growers and producers on the Fleurieu Peninsula. 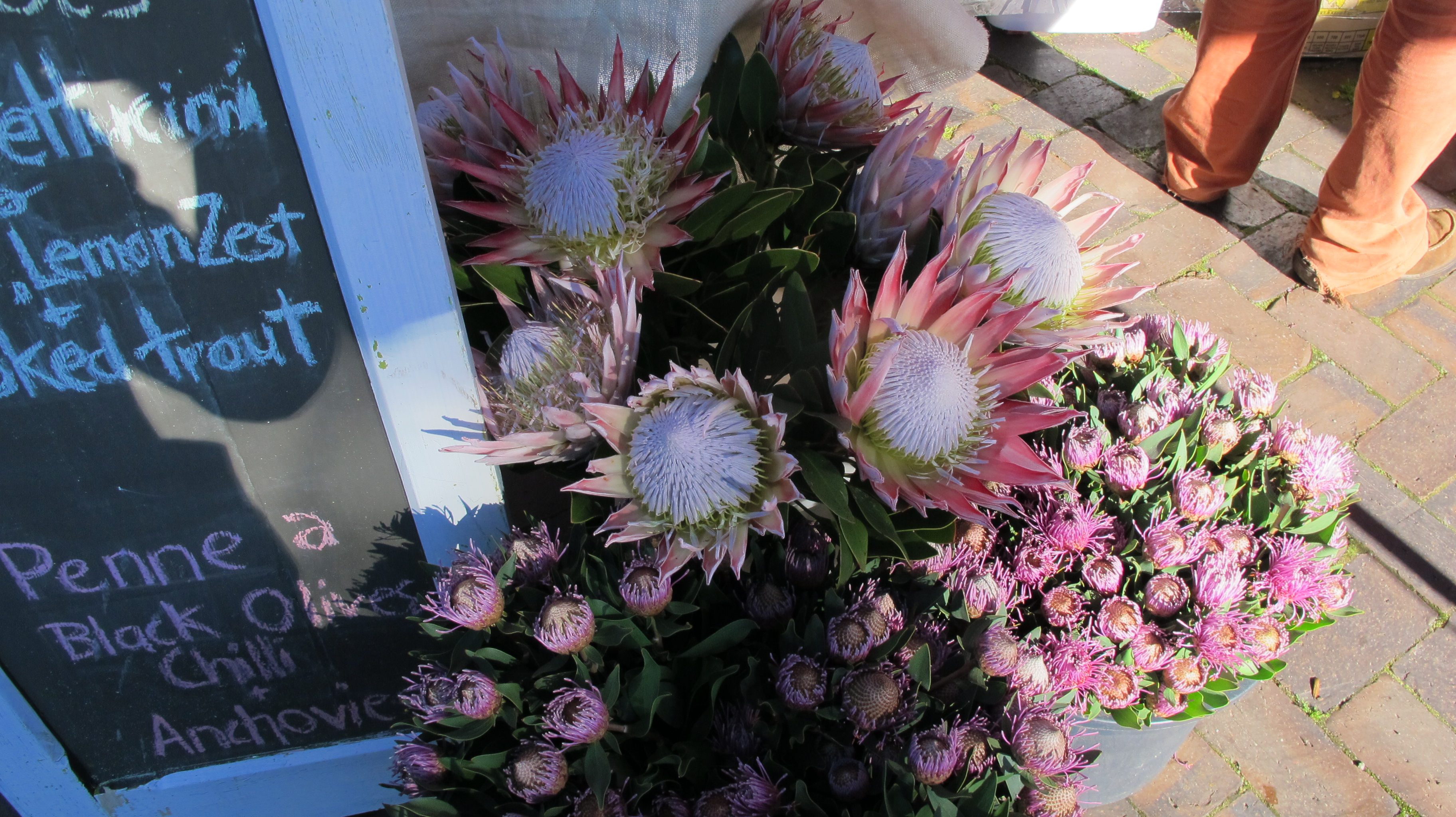 Put all this together and it’s not surprising that the town is home to Fino, voted Best Regional Restaurant in South Australia (Gourmet Traveller Restaurant Guide 2013).

Opened in 2006 by Sharon Romeo and award-winning chef David Swain, Fino’s market-driven menu is earthy and rustic with a focus on freshness and flavour rather than fads and five-star fuss. Where possible, produce is freshly plucked, picked, and delivered from the best of our local farmers. The unassuming restaurant is set in a 1850s cottage, with an outside area in summer. Inside, it’s understated-modern-farmhouse: simply furnished, whitewashed walls, arches and slate floors. It almost feels like a contemporary take on a little resto in a fishing village in the Mediterranean. 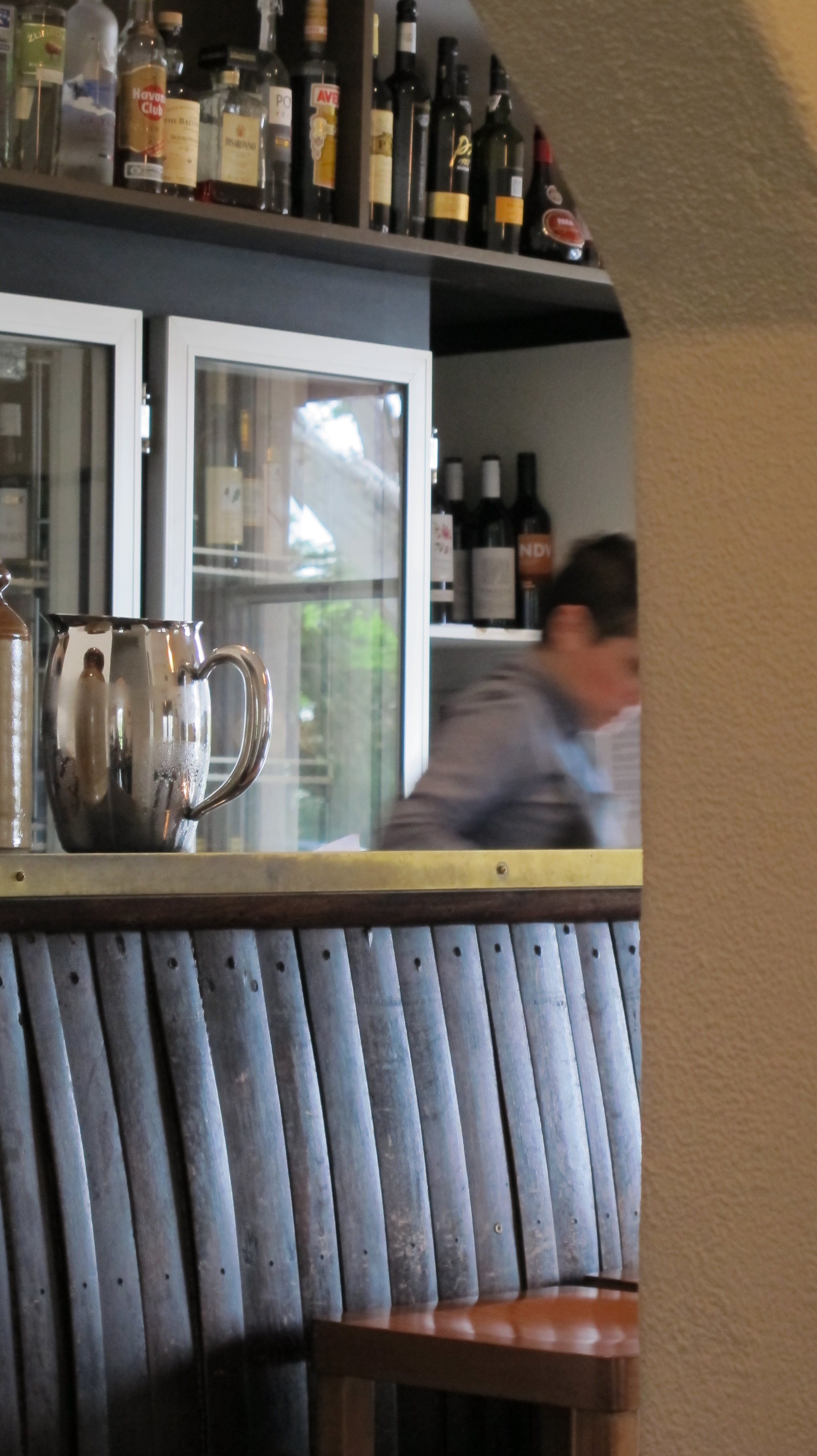 Sharon is a delightful maître d’ and sommelier – genuinely warm and obliging and full of knowledge. We chat about the change of season and she tells us that the peas are just coming in, along with fresh chèvre from Woodside and garfish from the Spencer Gulf. As well as the service being exceptional, there is an eclectic wine list with a mix of wines from local and European vineyards, particularly France and Italy. Fino scooped the Winner ‘Hall of Fame’ for Australia’s best small wine list 2011.

All dishes are designed to be shared and we opt for the Daily Shared Menu, a hearty winter carte of five courses for $60 per person, just before the doors are thrown open to spring. By sharing, it becomes more of an experience and a great way to taste a range of produce.

Our first course is salted snapper with Romanesco (Roman cauliflower) and Lyonnaise dressing. The fresh, perfectly cooked produce speaks for itself and the snapper is moist and flavoursome.

Next comes earthy buckwheat, mushrooms and chestnuts in a Spanish cazuela (rustic clay pot) that arrives sizzling hot from the oven. On top is a surprise and splash of colour – vibrant brussel sprouts. 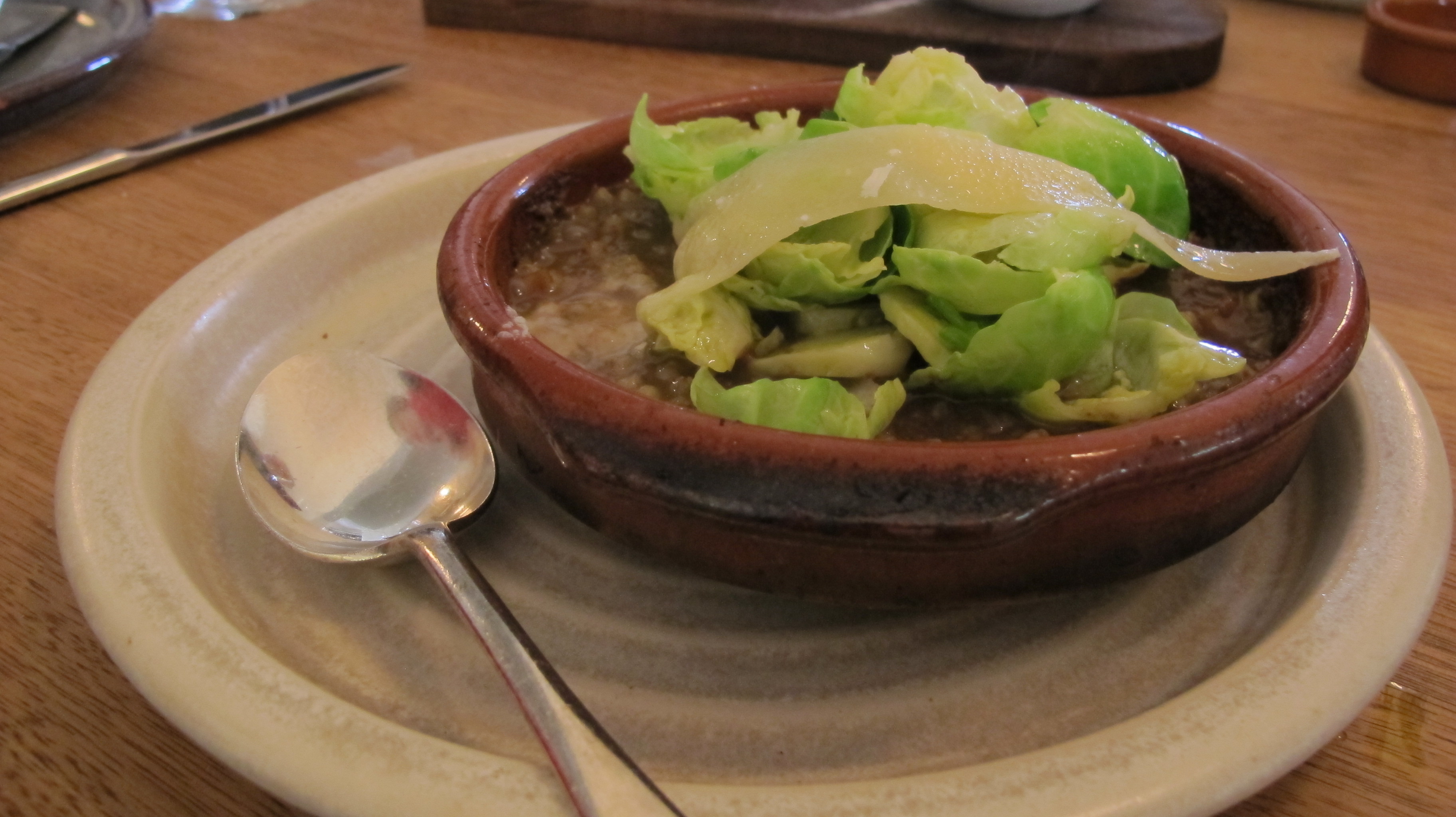 Filleted local garfish are served with heads on, and accompanied by divine fondant potato with spring onions and fin herbs. At this stage in the lunch, and with other restaurants in the town and region to try, I am pleased that David (one of the friends dining with me) has bought land to build on in the hills behind! 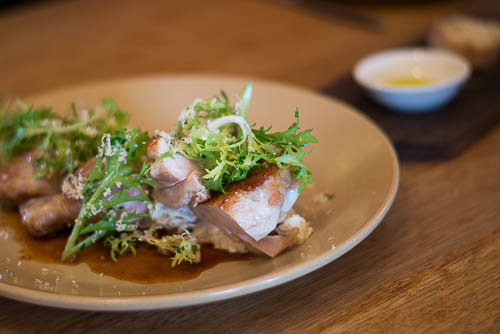 Next in the crescendo is Inman Valley free range chicken served on lightly salted celeriac rémoulade; shredded celeriac root with house made caper mayonnaise, finished with a grating of fresh horseradish. Ashley and Christine Boyer sell their Inman Valley Poultry at the farmers’ market. 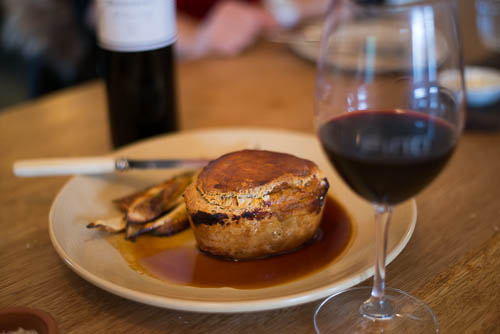 There should, in fact, be only one more dish but we couldn’t resist the sound of Trott Shiraz Pie and we snuck in an extra…Pourquoi pas? ‘The dish was created using three local ingredients, lamb, Kalamata olives and Shiraz,’ says Sharon as she pours glasses of Cradle of Hills Shiraz Mourvèdre 2010 from McLaren Vale. ‘It’s on the menu every winter. The lamb is from Normanville, the olives from Coriole and the Shiraz from Wirra Wirra.’ The pie is divided into four and one small slice is enough as it is very rich and full of flavour. There is something about it that reminds me of slow cooked lamb roast in a sticky-black-pan-juices kind of way. Lamb roast was a Sunday tradition in my childhood. The roast was put in a very slow oven early morning and cooked for hours until it was falling off the bone; a classic gigot d’agneau de sept heures or seven hour leg of lamb. The pie is held in a sour cream pastry and served with roasted parsnips. 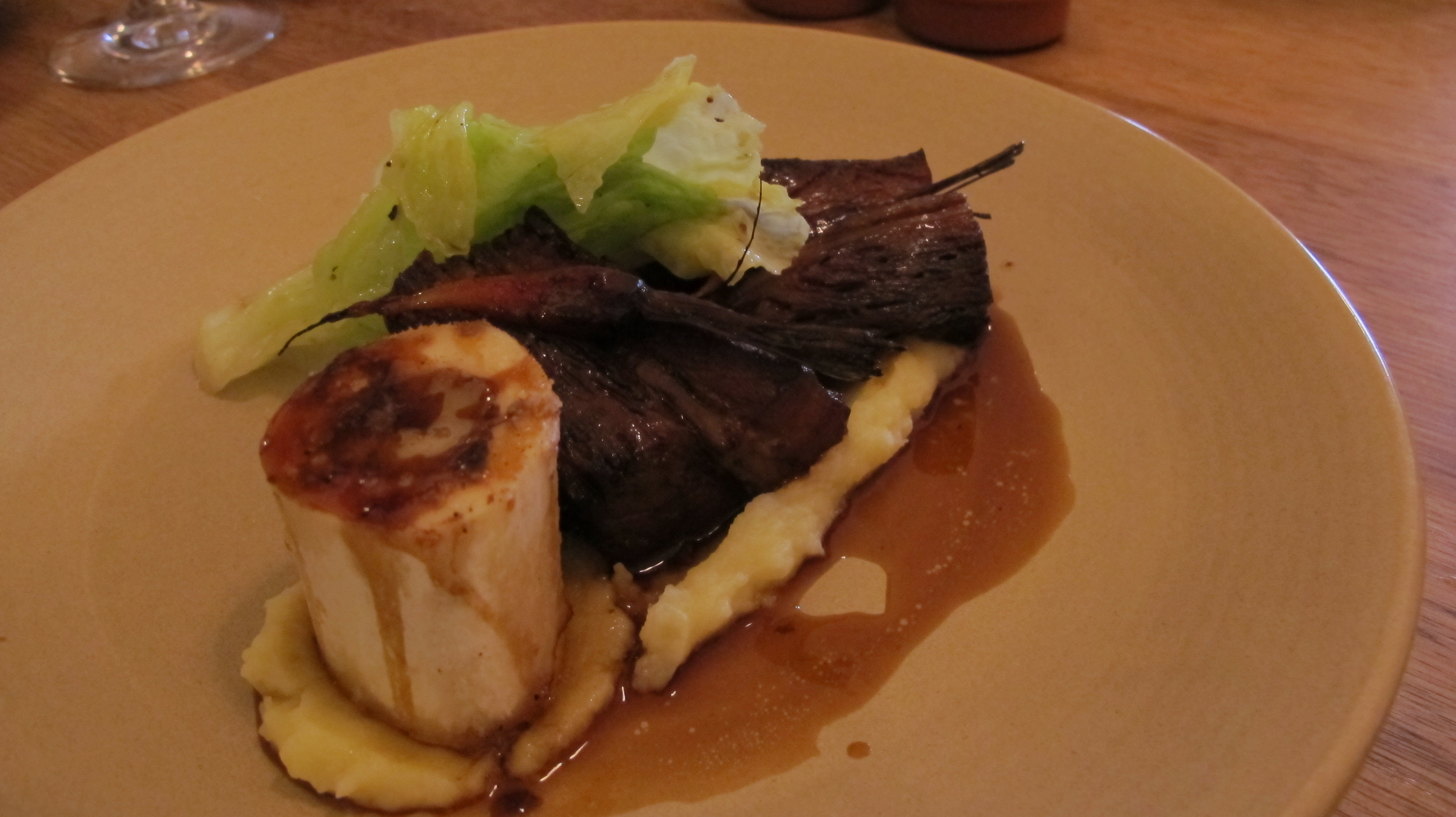 Our last dish is a comforting slow cooked Angus brisket with intense flavour and so tender and soft that you could eat it with a spoon. It is served with bone marrow and baby carrots. When chef David has finished service he tells us that the brisket has been cooked for 14 hours at 110 degrees. 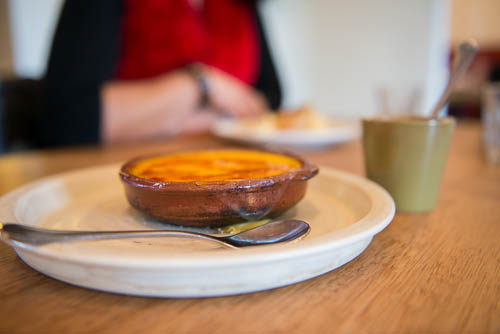 The Brebise d’Argental sheep’s milk from France and the goat’s milk cheese from the Pyrenees are tempting but Crema Catalana boots them down the list with a burnt sugar topping that snaps as the spoon plunges through. ‘It’s been on the menu for seven years,’ says Sharon.

Through September, Fino is offering a Spring Market Lunch on Saturdays (an entrée, main and glass of wine for $40) which, combined with a visit to the farmers’ market, a couple of cellar doors and other good eateries in the area, would make a lovely weekend escape to the country. David, hurry up and get that house built!