I’m sure that you’re as shocked as I am, seeing a new blog post from Knife & Fork in the Road!

Between posts, a lot of water has flowed under the bridge, but my personal highlight has been becoming a grandmother. Precious little Lila Grace is now seven month’s old.

To quote A. A. Milne in Winnie The Pooh, ‘Sometimes, the smallest things take up the most room in your heart.’ 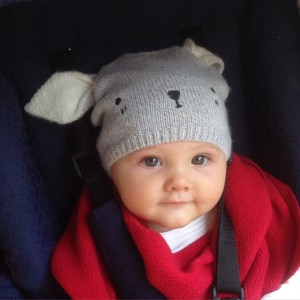 Lila, seven month’s old, rugged up for a walk.

At times, however, the waters have been rather rough and choppy. I lost my dear mother just a month ago, a woman who had an incredible capacity to spread love and joy, and I miss her every day. I am blessed to have so many cherished memories.

Also, as some of you know, a big project that I was working on went pear-shaped. Sadly, months of research and writing on London ended up in the bottom draw for a rainy day. I count myself as lucky, though, to have spent an extended time in the company of a good old friend and Londoner, who not only put me up, but showed me around and madly photographed and sketched her way around town with me. I first met Cecilia, an illustrator, when we both lived in New York many moons ago when our girls were young.

Anyway, time is ticking by and at the risk of all this wonderful material going out of date, I have decided to put a few favourite London addresses on the blog in the next little while.

The first address is a restaurant in Kensington called Maggie Jones’s. On the doorstep of the parks, the elegant neighbourhood embodies classic London charm.

World-weary and hankering for a warm and cosy place for an early dinner, Cecilia and I are immediately drawn to the window where a waiter is lighting candles. We peer in. He comes to the door and greets us with a smile. ‘We are open,’ he says, and before we know it we are deliberating over Maggie’s Creamed Fish Pie and a crispy roast chicken with bread sauce and gravy. 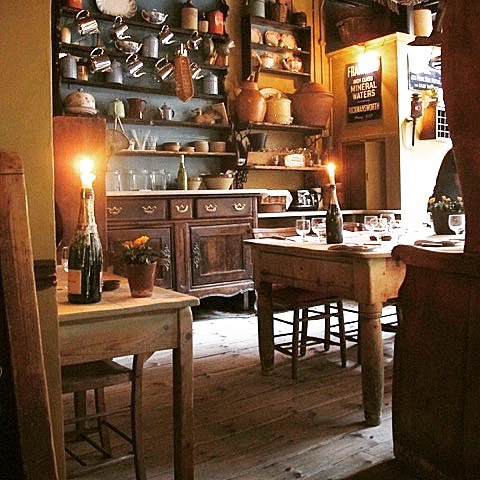 It is pure serendipity that we have stumbled across this rustic restaurant off Kensington Church Street after a long day of scribbling notes and shooting in the rain. All wood and warmth and snug alcoves, Maggie’s feels like an old English farmhouse and is filled with tall country dressers and higgledy-piggledy bits and bobs.  It’s a nice change from the pared-back restaurants about. The dining rooms ramble over three rickety floors joined by creaking stairs upon which homey fare is dashed up from the kitchen on vintage English plates. Refusing to bow to the whims of food fashion, Maggie’s offers a menu groaning with traditional pies, puds and classic British food in generous portions. Above all, however, its long-standing popularity hinges on the high quality dishes, friendly staff and authentic feel.

Rustic bread and chunky crudités appear, and a blackboard with specials is propped against the wall. French wine rules the roost, sold by the bottle and half bottle and there is also a touch of French on the menu. Onion Soup is a speciality. In fact, a large French enclave resides in South Kensington, which is home to the French Lycée. Other entrées include globe artichoke with hollandaise sauce, duck liver pâté and prawn cocktail. It feels like a throwback to a fabulous early 80s dinner party! 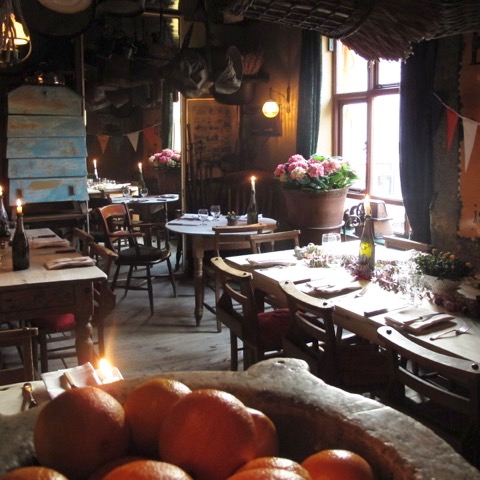 Christine the maître d’ comes over for a chat. We discover that the family-run restaurant opened in 1963. The current owner, Englishman Peter Frankel, is elderly now but still comes for lunch in his racing green Jag with his two English bulldogs. Our piping hot mains arrive. By now we are ravenous and I plunge a serving spoon into Maggie’s Creamed Fish pie with its piped potato top. Swirling aromas escape. It is packed with prawns and cod, has a lovely texture and a sauce full of flavour. Cecilia opts for a Chicken and Artichoke Pie with a golden pastry lid and we share sides of green beans, and peas and bacon. Everything looks so homemade and delicious we could be in a friend’s kitchen.

By 7.30 pm the place is heaving, and many diners appear to be local regulars who are greeted like old friends. English couples and families; kids dressed neatly in Boden. What appeals is that while it’s incurably romantic and intimate enough for a special occasion, it’s a place you can feel equally comfortable in straight from a rugged day of exploring the parks.

Christine also tells us that the restaurant is named as an alias for Princess Margaret who often used to dine here, booking under the name ‘Maggie Jones’. As we speak, Prince Michael arrives, grandson of King George V and the Queen’s first cousin. He is a regular and is discreetly ushered to his table with his black Labrador, Shadow.

‘We have a lot of game on the menu in autumn,’ says Christine. ‘In summer it’s more fish, savoury tarts and salads, and on a cold winter’s night you will find casseroles, soups and pies.’ Indeed, it strikes me as more of a cosy, come-in-from-the-rain sort of spot. Steaks are also staples, along with dishes such as Grilled Rack of English Lamb with rosemary & garlic, and Steak & Kidney Pie. There’s a reasonably priced lunch menu and the traditional Sunday lunch is popular, three set courses for £21.75.

Desserts are jolly and conventional: Sherry Trifle, Burnt Cream (the original Cambridge University recipe), Bread & Butter Pudding and Spotted Dick. We share a crisp apple crumble topped with slowly melting ice cream and served on pretty crockery. If you’re feeling mellow, you may wish to finish with a Malt Whiskey, or a wee drop of vintage Port and a wedge of Stilton.

‘Make a remark,’ said the Red Queen; ‘it’s ridiculous to leave all the conversation to the pudding.’

Lewis Carroll Through the Looking Glass