One of the most popular addresses at the Adelaide Central Market is Angelakis Bros seafood.  Whatever the time of day, you are likely to find a sea of customers peering into the long glass counter mulling over what to cook for dinner. There is an astounding variety of both wild-caught and aqua cultured seafood and among the sparkling fish and succulent shellfish are barramundi, King George whiting, pipis from Goolwa, yabbies, bugs and our renowned Coffin Bay oysters. In fact, for the visitor to South Australia, a cruise down the counter is a great introduction to the creatures found in our local waters.

Michael George Angelakis migrated to Australia in the 1920s from the Greek island of Symi in the Aegan and began fishing the rough waters of the Great Australian Bight in a borrowed dinghy. Today, in its fourth generation, the Australian owned, family operated company is synonymous with seafood and a leading supplier of quality seafood in Adelaide and the state, as well as poultry and game. The Seafood King, Michael Angelakis and Charlene from WEA

This week, I managed to escape the ‘moving madness’ for an afternoon to attend a Seafood Master Class at WEA with Michael Angelakis – third generation fishmonger in the family with 45 years knowledge in the school of fish. The ‘Seafood King’ is a well-known Adelaide identity with a big personality and a TV show Out of the Blue. In the series, he delights in cooking up local seafood in different parts of the Australian coast and the world against beautiful backdrops with his mate Michael Keelan.

The WEA offers a wide range of courses in food and wine and today there are 70 guests clamouring to hear Michael talk about fish and to see him cook, a few too many for my liking, but such is his popularity. We start with delicious appetisers cooked up by the WEA tutor for ‘Practical Indian’ paired with wine from Zerella in McLaren Vale.

The first hour is dedicated to learning about the preparation of fish and seafood. ‘The most important thing is to understand your product,’ says Michael. ‘It’s all about enhancing the natural flavour.’ With the help of his sous chef we are shown how to fillet, clean and prepare a range of South Australian produce including octopus, King George whiting, tommy ruffs, prawns and blue swimmer crabs. ‘A great combination is sherry and crab.’ He delivers advice on how to cut to get maximum recovery, and cautions to never throw away anything. 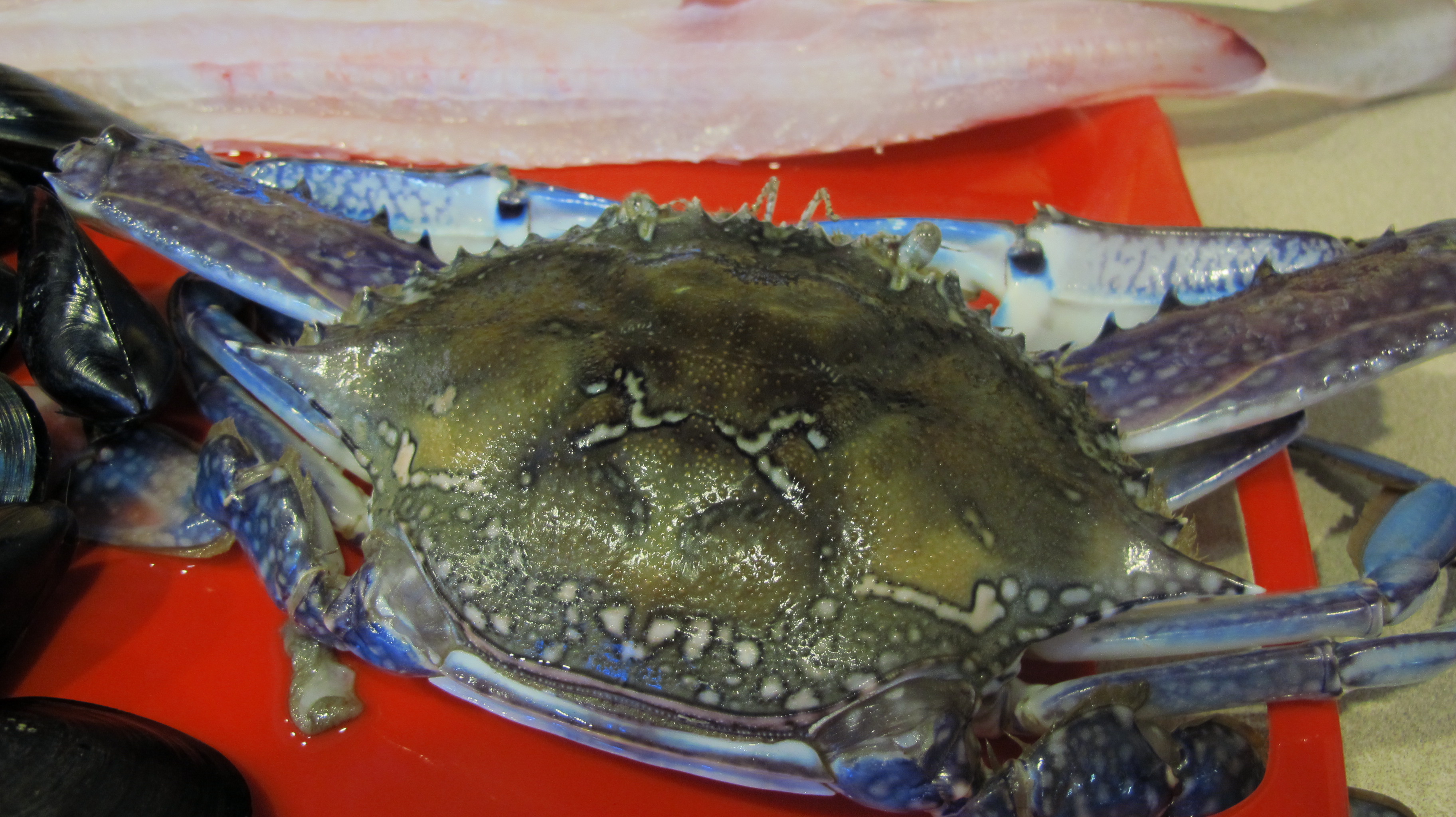 Tools are held up, from a fish scaler and magnetic knife protector to the exquisite Mike Hunt knives from Streaky Bay, snug in their leather pouches. As Michael demonstrates, he explains how the fishery works on the cycle of the moon and tells us about the world’s largest wholesale fish market, Tsukiji in Japan, where the public can apply to attend the live early morning tuna auctions. 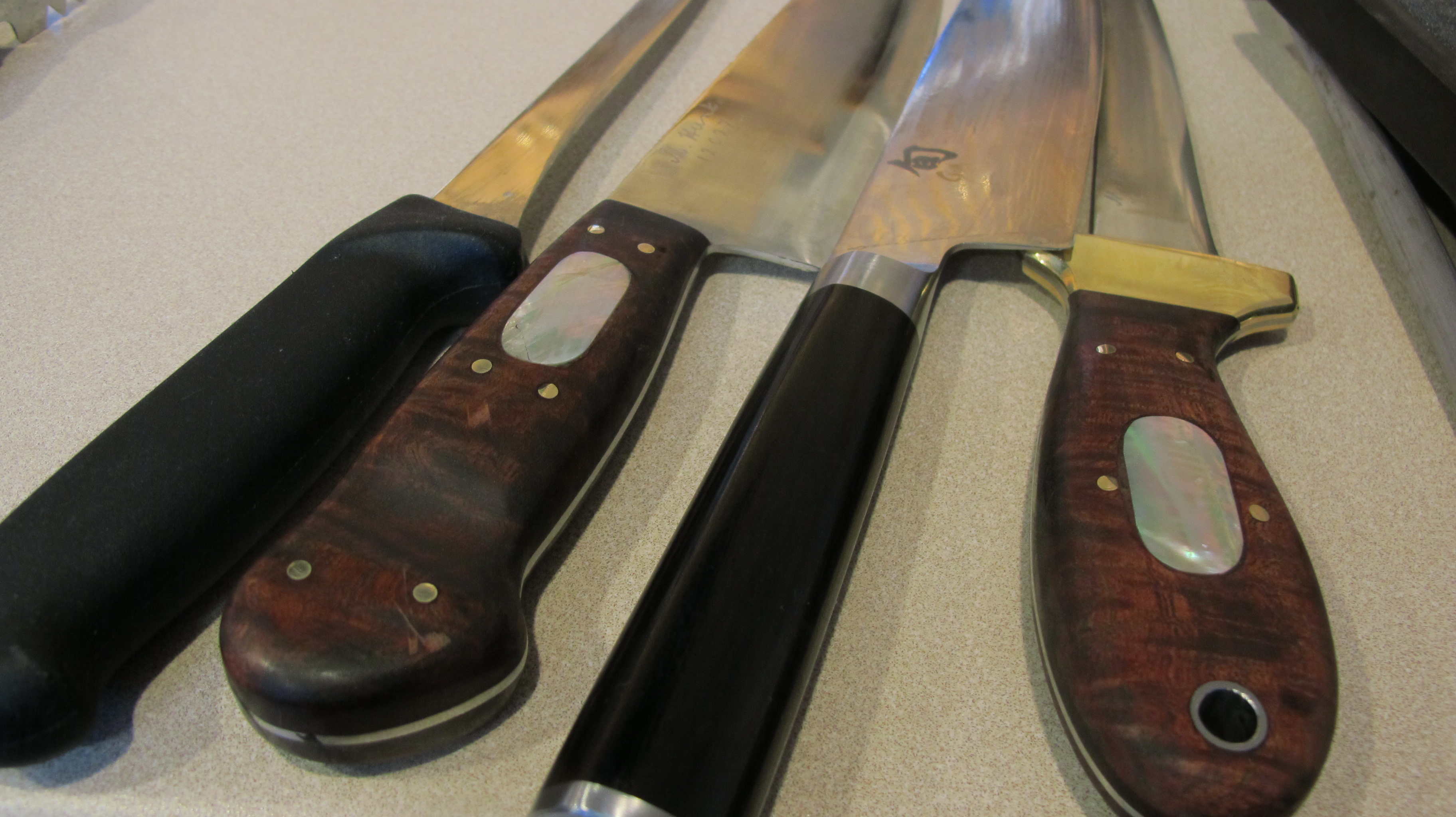 He jumps from anecdote to anecdote and the class is salt and peppered with tips such as ‘Just […] grill or bake salmon trout, don’t do anything else, and wipe fish down after filleting, never wash.’ He reinforces time and again that the greatest lesson he has learnt is to keep everything simple so that the dish takes on the flavour of the Coorong or wherever it is from…don’t mess with the natural flavours. ‘Many of the top chefs I know use four or five ingredients tops in their recipes, like swordfish with parsley, olive oil and garlic.’ He goes on to explain that one of the hardest fish to fillet is garfish but it’s one of the nicest eating fish. ‘Dad used to simply roll them in seasoned flour, grill them, and eat them off the bone.’

I was happy to hear him sing the praises of Kinkawooka ‘good to go’ mussels. I love buying a packet of these sweet, pot ready mussels from Boston Bay. Sold cleaned, debearded and packed live in their own juices, these premium black mussels have a shelf life of 10 days, meaning you can buy them ahead of time and they can sit in your fridge for a few days if necessary. At Boston Bay and in the surrounding pristine waters you will also find Australia’s largest commercial tuna fishing fleet and premium prawns, abalone and crays. It’s the hub of wild harvest and aquaculture fisheries in South Australia and I was lucky enough a few years back to be sent to do a story on the region, accompanying an abalone diver and seeing the tuna fleet first-hand.

After a short break, the second lesson in the school of fish is the demonstration of four recipes, with tastings.

The first is Barbecued Octopus, which sets off the smoke alarm! An Angelakis family recipe with the flavours of the Agean Sea, the octopus is marinated in lemon juice, olive oil, oregano, pepper and salt before being charcoaled. ‘It’s a signature dish we have cooked around the world, including for the King and Queen of Sweden,’ says Michael. 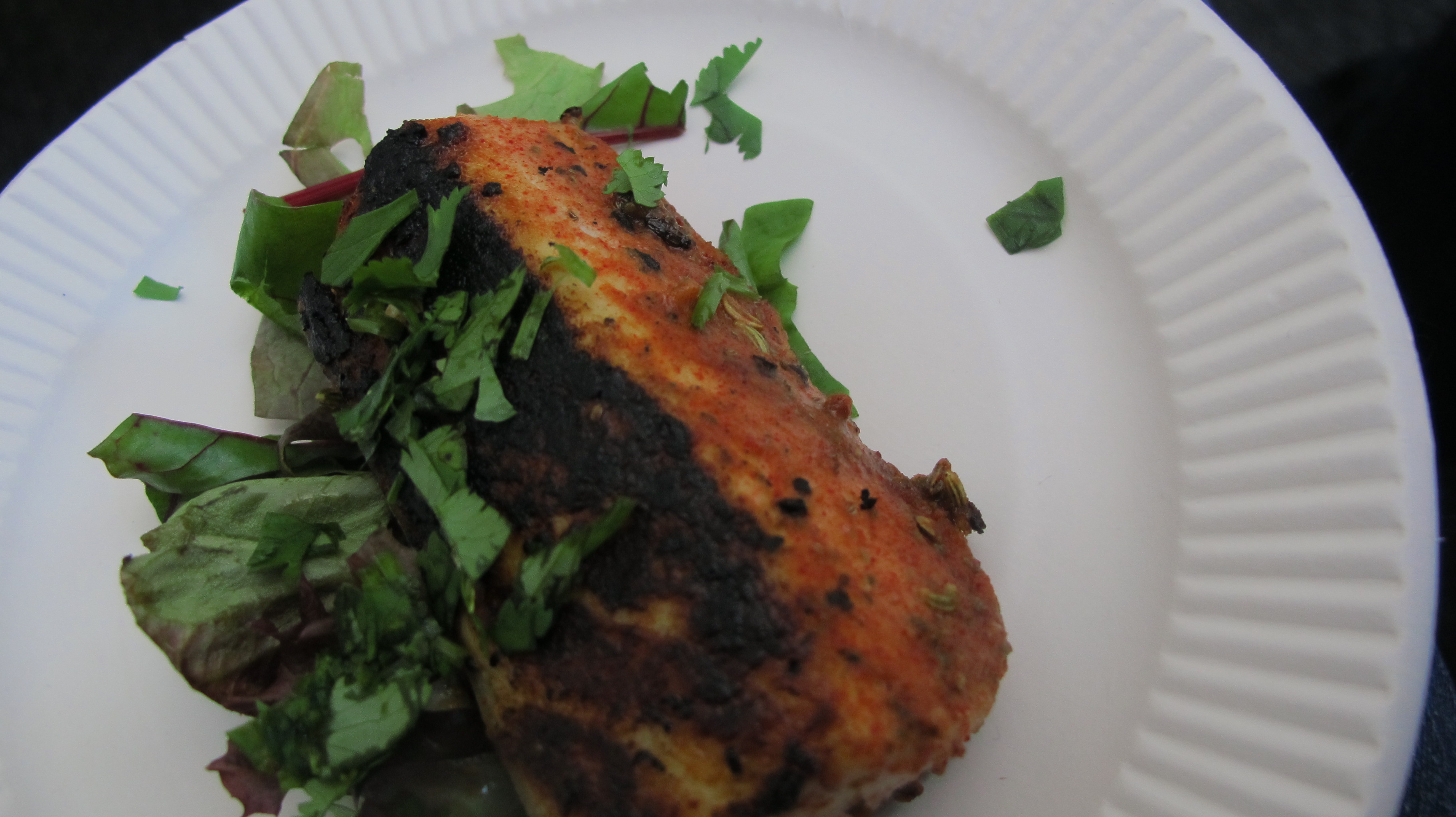 Next up is Cajun Fish Steaks made with kingfish. Michael believes that once you know something about the spices of a dish and where they come from that you start getting images of food, see the romance of  food, and understand the history. Plates are circulating around the room as he speaks followed by a trail of cayenne pepper and sweet paprika.

Then comes Atlantic Salmon wrapped in Prosciutto. As he pan fries the fish Michael warns to leave the middle raw as it continues to cook when you take it off the heat. ‘Never overcook fish!’ This is a simple yet impressive dish that is great with garlic mash and Asian greens or asparagus. 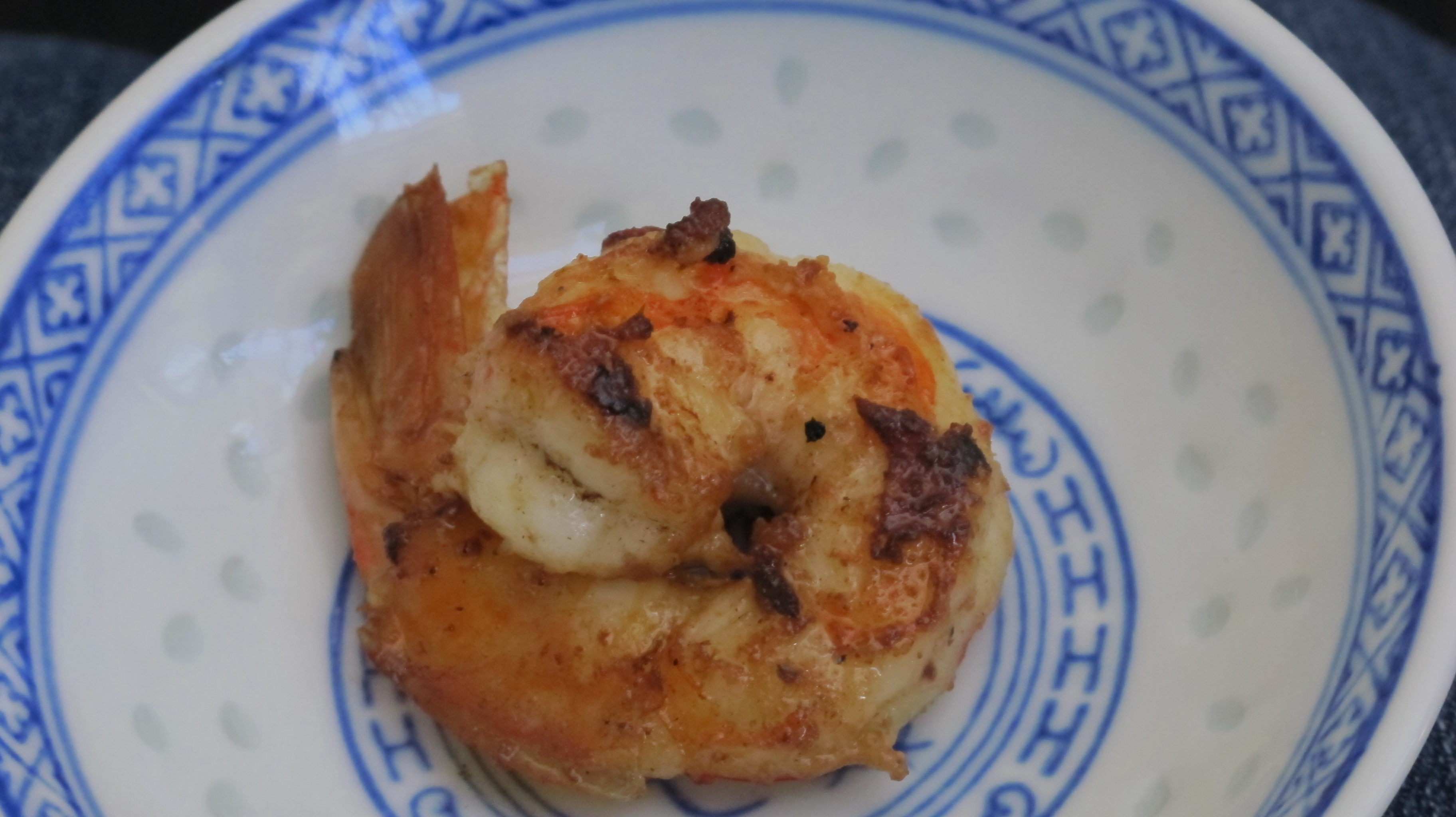 We conclude with a couple of Drunken Prawns, a flashback to the wine bars and taverns of the 70s, when they were served in ramekins. The prawns are marinated in garlic (he never crushes, just thinly slices), olive oil, bay, red chilli and lemon juice before being flambéed in whisky or brandy. There is a sudden, bright flash of fire to finish that matches the Seafood King’s vibrant energy, and I head home with my recipes, inspired to cook.

Pity the pots and pans have just been packed.